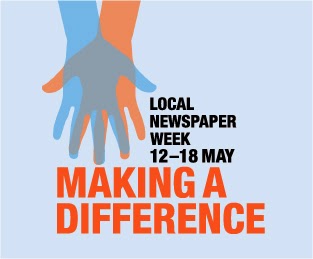 It's quite fitting that I started this blog during Local Newspaper Week (May 12-18, 2014), because I had so many great years working at newspapers around the UK.

I had the chance to meet and interview politicians, stage and screen actors, singers and musicians. I worked on major crime stories, business exclusives and was part of the teams covering major events such as the miners' strike, the Kegworth air crash, the Greenham Common peace protests and the Hillsborough disaster. There were also opportunities to try out, and write about, activities such as hot air ballooning, fencing and Jeep racing.

Now, although there's a risk this will sound a bit like the Monty Python Four Yorkshiremen sketch, I want to tell you about the first local newspaper office that I worked in. It was a single room without its own loo (we used the hairdresser's upstairs except on Monday when she was closed and we went to the pub, or home). It had one cold water tap sticking out of the wall with a bucket under it (no sink). The two of us who worked there did have a kettle though, and an electric socket, so we could make tea and coffee, wash the mugs in the bucket afterwards and then nip out the front door to pour the used sudsy water down the drain.

There was glamour and excitement too. I travelled to countries including Portugal, Spain, Belgium and Greece through my job, but there were also lengthy council meetings - often running well into the evening after a hard day's work - and days of listening to magistrates ruling on minor offences. But I was always intrigued by studying people, their actions, their lives and their stories and there was plenty of opportunity to get out of the office and unearth fascinating human interest stories. I believe there's no bigger buzz than realising you have found an exclusive - and sitting down to write it for others to share.

Today's local newspapers sell a fraction of the copies they sold 35 years ago because our lifestyles have changed and the way we consume news has been transformed by the internet and social media. The Newspaper Society reminds us this week that there are still 1,100 local newspapers and 1,700 associated websites in the UK.

The number of journalists and photographers employed by local newspapers has shrunk in the last couple of decades, meaning that many of today's reporters spend a lot of time office-bound gathering news via email and phone.

I remain convinced that local newspapers have a unique ability to make a real difference to people's lives. They can achieve great things through campaigning and supporting fundraising for good causes, But at the end of the day they are - and always have been - commercial businesses that need to make a profit - and that always has to motivate their direction and their news agenda decisions too.

But meanwhile, back to those four Yorkshiremen.....

Posted by Elaine Pritchard at 11:21