Colouring (or coloring) my view of running

For more than 40 years, 'running' and I have been sworn enemies; from the first time the teachers lined me up with half a dozen classmates and made me start running along a bumpy grass track at primary school sports day, it was a match made in hell. On that first outing I couldn't understand why my legs couldn't move fast enough to catch up with the other children and my cheeks burned with embarrassment as I crossed the line in last place.

It was a scenario that was replayed countless times in PE lessons, school cross country runs (the worst!) and sports days for the next 11 years.

'I CAN'T run', I'd say, by way of explanation as fellow pupils either sniggered or tried to look sympathetic depending on their position on the 'mean girls' scale.

I HATED it, just HATED it. On the longer runs, my legs ached, my lungs burned and because I KNEW I would finish last I always did.

In my early 20s I flirted with the old enemy by trying a spot of after-work jogging each day to get a bit fitter and put the stress of the day behind me - but my good intentions didn't last long.

Last year I downloaded the Couch to 5k app on my phone. You can read more about that and my journey here on LinkedIn  Now, after too many months 'off' from running (there's always an excuse to hand), I'm running again in preparation for my FIRST 5k in aid of Burton YMCA. You can sponsor me and the rest of the team here. 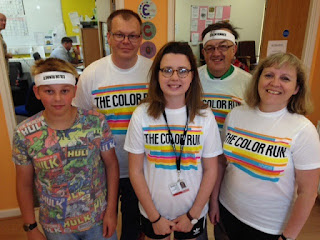 What I've learned about running in the last year is that the biggest challenge is silencing the little voice in your head that says, 'Stop now. You know you can't do this. You don't need to do this. Just stop and walk for a bit'.

The secret is to distract yourself from these negative thoughts. That's why for my first 5k I was keen to do the Color Run (This idea started in America, hence the US spelling). If you've not come across this idea before, you get showered with colours at the end of each kilometre - and if that doesn't distract you from the voice of doom in your head, nothing will.

So, if you'd like to show solidarity with someone who's spent most of her life thinking that running a bath was the most exercise she'd ever do - AND support the great work of the YMCA, visit our Virgin Money Giving fundraising page.
Posted by Elaine Pritchard at 17:06 No comments: