I love being part of the Burton Small Business group, and we're leading a very exciting event for all local small businesses in the town on the morning of this year's Small Business Saturday - December 5, 2015.

If you work for, or own, a small business in the Burton-on-Trent area and you're free for just half an hour on the morning of December 5, please come along and join us. All the details you need are here

When you've read it you will understand why it is important that you sign up to the meet up event and let us know you are planning to attend. It will be a great PR opportunity.

We've also updated and expanded our free small business guide, with help from our partners The Growth Hub, Else Solicitors, The Chartwell Practice and Sherwin Insurance Services Ltd, and you can now download it from our website.

One of my Burton Small Business colleagues, Tilley Bancroft of Red Door Studios, helped me make a short video promoting our event which you can watch here 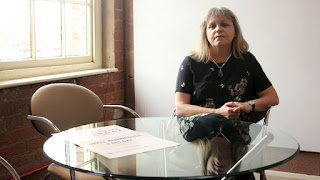 Being one of this year's #SmallBiz100 has really opened up some doors for me - and I'll tell you more about that in a future blog.

Meanwhile, do take a look at the Small Business Saturday website and see how you can get involved this year.
Posted by Elaine Pritchard at 16:33 No comments:

RIP little star - Twitter's traded you in for a heart

One of the little things that made Twitter different from other social media platforms was the stars displayed beneath tweets, which encouraged users to 'favourite' them.

One of the questions I am most frequently asked, when I'm helping businesses and organisations get to grips with Twitter, is 'What is favouriting?'

It seems that across the world people have been asking the same question. So from today the star has started to disappear, to be replaced by a heart and the word 'like'.

It seems to be part of a drive by Twitter and its new CEO (who was one of its co-founders) to make Twitter easier and more appealing to users. In recent weeks we've also seen the introduction of polls that can now be easily created with a choice of two answers:

Each poll closes after 24 hours and automatically displays the results.

Let me know what YOU think about the changes. Do you still 'heart' Twitter? Or is it no longer your favourite social media channel?
Posted by Elaine Pritchard at 19:09 No comments: