Monday Motivation - a giveaway to help you with blogging inspiration


Blogging is a great way to raise your profile if you run a business of any size or work as a freelance.

Some companies have a blogging module built into their website, or use free tools like Blogger to create a feed of news, articles and opinion pieces that can be linked to their website or stand alone.

If you don't think you'll have enough material (or time) to blog consistently, you might want to think about using the LinkedIn publishing platform, Pulse. Just click the 'Publish a post' button on your LinkedIn home page to get started and write an article whenever you have the time and something, useful, interesting or thought-provoking to share.

Inspiration and organisation for blogging in 2016

Sometimes the business people I talk to say they struggle to come up with ideas and to plan ahead for the blog posts they want to write. So in December, my friends at Essential Print Services in Derby helped me to design a blogging content calendar card that will prompt you to think about at least one blog topic a month that you could write and how it can help you reach and influence your ideal customers through keywords and strong, relevant  'calls to action'. 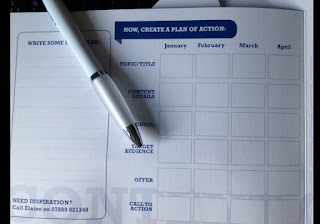 As we approach the end of January I have a handful of these left, so if you want to start blogging for your business this year, contact me and I'll be happy to pop one of the calendars and a pen in the post to you.

Posted by Elaine Pritchard at 09:38 No comments:

In the fast-paced, competitive world of social media, do social networks need to keep evolving to survive and are any of them safe from the threat of extinction?


Last month the social network Twitter launched 'Moments' in the UK - a live feed of curated content gathered by its own team and also by content partners including Sky News, The Sun, The Met Office and The Economist.

It was billed as 'The best of Twitter in an instant'. The Twitter team also described it as the way to see 'what everyone's talking about'.

Twitter has been the place that I have found out about many breaking news stories in recent years - and if I wanted to see more about that subject I would put a name or phrase into the Twitter search box to instantly find more tweets about that story.

When the Moments feature launched in December I raised some initial concerns about it in this blog for Nottingham PR agency Cartwright Communications. 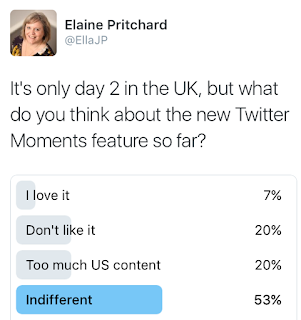 Then I carried out a poll on Twitter itself to get a quick reaction to the new feature.

As you can see from the screenshot on the left, only 7% said they loved it; 20% didn't like it; 20% thought there was too much content from the United States and 53% felt indifference. Maybe it's grown on some of them since then.

Twitter bosses say it's all about making the network easier to use. Commentators say this desire is given a sense of real urgency through pressure on Twitter's bosses to keep growing user numbers.

Then came the announcement this month that Twitter was considering allowing people to publish tweets of up to 10,000 characters - a huge hike from the current 140 character limit.

A piece of news today made me think about the evolution of social networks. Friends Reunited, has announced it will close. I can clearly remember how Friends Reunited blazed a path following its launch in 2000 and prompted millions of people to sign up and find old friends. It was such a success that broadcaster ITV paid £175 million for it in 2005. But in the next few years, sites such as Facebook and Twitter changed the face of social networking and by 2009 ITV sold FR to comic publisher DC Thompson for £25 million. Today, one of its founders, Steve Pankhurst, was quoted as saying it was being used by just 'a handful of members'.

So did Friends Reunited fail because it didn't adapt and develop when other social networks came along? In which case, is Twitter doing the right thing by shaking things up? Or if it misjudges the mood and appetite of its current users will it still go the way of MySpace and Friends Reunited, the giants who once ruled the social media world?


Posted by Elaine Pritchard at 18:58 No comments: