Specsavers focuses on Oscars mix-up with a well-timed tweet

Successful social media marketing for businesses is about being true to your brand values. If you can inform and entertain, and if you can be timely and topical too, then you are on to a winner.

So I have to say congratulations to Specsavers, who, in my opinion, got it spot-on when it came to reacting to this year's gaffe at the Oscars.

A mix-up with envelopes led to La La Land being announced as the winner of the Best Picture Oscar instead of Moonlight. The mistake was corrected but not without some seriously awkward moments on stage that were pored over by print, online and broadcast media in microscopic detail in the hours that followed.

Meanwhile, Specsavers took to Twitter with this simple but effective tweet: 'Not getting the Best Picture? #shouldve #Oscars' and an image of a hand pulling a card from a red envelope bearing the company's famous advertising slogan 'Should've gone to Specsavers'. 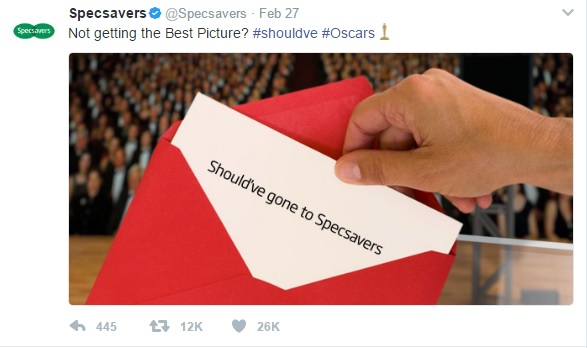 Although the eyesight of award presenters Warren Beatty and Faye Dunaway has never been called into question, the Specsavers tweet was funny, concise, on-brand and on-message.

It's not the first time that the eyecare company has been on target with a funny tweet in the aftermath of an incident that's made global headlines.

During the 2014 World Cup you may remember the moment when Uruguay striker Luis Suarez bit Italian defender Giorgio Chiellini. A number of companies were quick to create reactive social media marketing campaigns, with comical images and tweets. Food companies led the way with Heinz, Subway, Ginsters and Snickers being among the businesses who suggested what else Suarez could have sunk his teeth into.

But in my book, Specsavers nailed it again, implying that Suarez should've gone to Specsavers to avoid mistaking Cellini for the Italian dish of cannelloni. 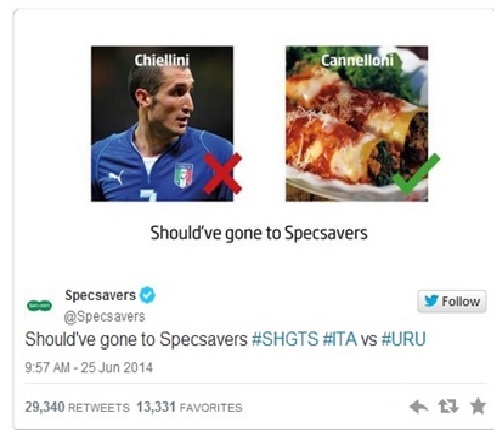 Yes, it gives us a laugh as we scroll through our Twitter feeds, and we're likely to retweet it, but what is the value to businesses who capture the mood of the moment on social media with topical, reactive marketing campaigns like these?

Well, it gives them a massive digital reach and enviable engagement levels - and some of that activity will translate into visits to the website and new followers and fans.

In the case of Specsavers, they will now be front of mind with many people when they next think about booking an eye test. A few people did tweet back that they were thinking of switching to Specsavers. Maybe they will, maybe they won't, but it has given Specsavers a massive audience online that would have been expensive to reach through traditional media channels.

Of course, brands such as Specsavers don't rely on social media alone; its Twitter strategy is just part of its overall marketing mix.

But I believe that businesses of all sizes can follow Specsavers' lead and focus on how they can start conversations, use humour  and capitalise on topical news and events to be memorable and create a buzz.

Posted by Elaine Pritchard at 18:16