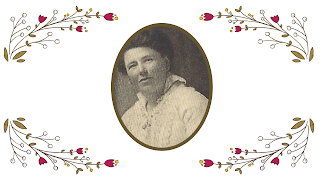 When I became a parish councillor, a couple of years ago, I met Burton historian Malcolm Goode and heard the story of Lily Thomas for the first time.

Lily is one of the unsung heroines of the home front in World War One. When the conflict began in 1914, she was a 39-year-old widow living in Stapenhill with her four-year-old daughter.

She decided to start a ‘little bit of war work’, as she called it, after learning that five Burton men were being held in German prisoner of war camps and had written home to their families about poor conditions.

By the end of the war in 1918, some 500 Burton men had been taken prisoner and Lily and her small army of volunteers had sent them over 25,000 parcels containing food, clothes and medicines.

I began reading the columns that Lily wrote during the war in the Burton Mail and her memoirs, which she self-published in 1920. Her voice rang out from the pages and I became determined to make more people aware of her story. The best way seemed to be to bring her back to life on stage. Although I’ve written for a living since I was 19, I’d never written a play - until now.

The first draft of my play 'The Godmother' has just been completed and I’ll be posting news soon about its premiere in Burton Upon Trent before the end of 2021.

It’s not an exaggeration to say that Lily’s actions saved lives. In her memoirs, she recounts the words of one officer from Burton who told her that suicides by despairing, starving men were frequent in the early months of the war.

He told her: “It is impossible to adequately describe the difference in the morale of the men as soon as the parcels began to arrive. Before they had been despondent in the extreme, and many of the deaths would not have occurred had the men had an incentive to live. As soon as parcels from strangers arrived, there went up a mighty cheer – ‘Hurrah! England remembers’. From that moment new life coursed through the veins of the men, and instead of the stony silence, whistling, singing and shouting became the order of the day, with jocular guesses and bets as to who would be the next to receive a parcel.”

So why has she been largely forgotten – including in her own home town?

A hundred years ago, everyone in Burton knew Lily. During the First World War she developed an impressive communication network including trusted British prisoners who were given responsible jobs in the post offices that were set up inside the prison camps. She invented a code that she managed to smuggle to them so that information could be exchanged, evading the wartime censors, and sounding like innocent news about friends and relatives. When serving soldiers came back to the UK to rest or recover from injury, Lily made a point of visiting them, learning more about how things worked in Germany and building trusting relationships. All this meant that Lily became the ‘go-to’ person for families across the town. They knew she would have information on injured and captured soldiers weeks before any official news was published.

No honours for Lily

Lily’s husband Edward had died when her only daughter Marguerite was one and Lily never remarried. Marguerite married but she and her husband did not have children. Perhaps a lack of descendants was one reason why Lily's name slipped from people’s minds.

Another factor may be that after the war ended, Lily received no official honour for her service. There was a homecoming party with many of the returned prisoners. They held a whip-round and bought her a tea service and donated towards a new bicycle for her.

The Order of the British Empire was introduced in 1917 to reward service in World War One. Many honours were awarded for work on the home front as well as bravery by members of the armed forces. But no awards came Lily’s way. She was an outspoken woman. Remember, this was before women had the vote and when they had less rights in law than men. It's clear that she ruffled a lot of feathers to get the job done. Maybe she upset too many decision-makers?

Her efforts were ridiculed initially with many people believing that the parcels would never reach the Burton men, that the war would be over very quickly or that the Government would ensure that food and essentials reached the prisoners. But Lily would not be swayed. She fought red tape and complied with ever-changing rules and bureaucracy throughout the war.

The Burton prisoners affectionately called Lily their Godmother and she was delighted to return the tribute and called them her godsons.

Lily was born and brought up in Guernsey and I'm continuing to research more about her early life there, but the play focuses firmly on the war years in Burton.

Posted by Elaine Pritchard at 22:53